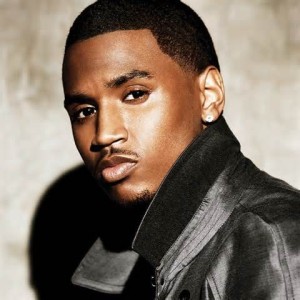 American singer-songwriter and actor from Virginia

Tremaine Aldon Neverson (born November 28, 1984), known professionally as Trey Songz, is an American singer-songwriter and actor. His debut album, I Gotta Make It, was released in 2005 through Atlantic Records. His follow-up album, Trey Day, spawned his first top 20 single, "Can't Help but Wait". Songz released his third album Ready in 2009 and a single from the album, "Say Aah" (featuring Fabolous), peaked at No. 9 on the Billboard Hot 100 making it Songz's first top 10 hit. Ready was nominated for Best Male R&B Vocal Performance at the 2008 Grammy Awards. The following year saw Songz's highest charting song to date, "Bottoms Up" (featuring Nicki Minaj) from his fourth studio album, Passion, Pain & Pleasure.

Tremaine Aldon Neverson was born on November 28, 1984, in Petersburg, Virginia.[3] He is the son of April (Gholson) Tucker, who was seventeen when he was born, and Claude Neverson Jr.[4] Raised as a military brat by his mother and stepfather,[5] Songz did not have aspirations for a musical career as a child due to his shyness, saying "Singing wasn't a reality for me, until other people started noticing I sounded good."[6] He recognized his vocal abilities at the age of 14.[6] Reluctant to sing, he began performing with encouragement by friends and family in high school. Record producer Troy Taylor was introduced to Songz through Songz's step-father with whom Taylor attended High School, ultimately leading to Songz signing a recording contract with Atlantic Records in 2003.[7] After graduating from Petersburg High School in 2002, Songz moved to New Jersey to begin recording his debut album, though recording did not actually begin until 2003.[3] In mid-2006, Songz began work on a follow-up album to his debut with longtime collaborator Troy Taylor and also employed successful Bryan-Michael Cox, Danja, Stargate and R. Kelly to help create the album. Trey aimed for the album to be more mainstream-oriented than his debut album. His second studio album, Trey Day, was released on October 2, 2007. The album reached #11 on the Billboard 200,[11] selling 73,000 copies in its first week. It has since sold 400,000 records in the US, becoming his second album not to be certified by the RIAA. The album was going to be released on May 8, 2007, but was continually delayed in order for a successful single to precede the album, as the lead single failed to impact charts. Songz performing at the Summer Jam in June 2010.

In 2008, Trey began work on his third studio album with Bryan-Michael Cox, Sean Garrett, Stargate and Troy Taylor and aimed for the record to be more mature than his first two. Before releasing his third album, Songz released a mixtape titled Anticipation in June 2009 through his blog, which featured songs from his third album.[13] Another mixtape from Trey was released in the summer of 2009, called Genesis. Genesis was a collection of Trey Songz's first recordings when he was fifteen years old and was released to show his fans the dedication that he had to making a record when he was young.[14] Trey released his third studio album, Ready, on August 31, 2009. The album reached #3 on the Billboard 200, selling 131,000 copies in its first week.[15] These are his best first week sales to date and the album was his first to reach the Top 10 on the Billboard 200. The album has since sold over 1,000,000 records in the US, earning a Platinum certification from the RIAA in June 2014, becoming his first Platinum album.

The fifth and final single from the album, "Neighbors Know My Name", was released in February 2010 and reached #43 on the Hot 100 and #4 on the Hot R&B/Hip-Hop Songs chart. A sixth single, "Yo Side of the Bed", was going to be released in June 2010, but its release was canceled due to unknown reasons. A music video, featuring singer Keri Hilson, was filmed and released, however. Songz was also the opening act for Jay-Z on his Jay-Z Fall Tour in late 2009. The album was nominated for Best Contemporary R&B Album at the 52nd Grammy Awards in 2010, but lost to Beyoncé's I Am... Sasha Fierce. On April 1, 2010, he recorded an episode of MTV Unplugged, which aired on April 26, 2010.[16][17]A documentary-series about Trey, Trey Songz: My Moment, began in June 2010 to positive reviews and high ratings. The 10-part series will end in August 2010 and follows Trey during his time as opening act on Jay-Z's Jay-Z Fall Tour in late 2009.

Songz's fourth studio album, Passion, Pain & Pleasure, was released on September 14, 2010.[18] Trey began work on the album in early 2010 with Sean Garrett, Troy Taylor and Stargate and has stated that the album will be his most personal to date and was completed in July 2010. The album's lead single, "Bottoms Up", featuring rapper Nicki Minaj, was released on July 27, 2010 and has reached number 6 on the Billboard Hot 100 chart, becoming his biggest hit to date. The single has since been certified 3x Platinum. "Can't Be Friends" was released as the album's second single in August 2010.[19] Songz embarked on the Passion, Pain & Pleasure Tour on August 6, 2010 with singer Monica. The tour is his first headlining tour to date and consists of shows in venues that seat 3,000 to 5,000 people. Songz also contributed the song "Already Taken" to the Step Up 3D soundtrack, which was released on July 27, 2010. He filmed a video for the song, which was released in July 2010. The leading lady in the video is former girlfriend and professional dancer Helen Gedlu. Songz appeared at the 2010 MTV Video Music Awards on September 12, 2010.[20] Songz performed at BET Awards 2011 which broadcast on June 26, 2011.[21] Songz performing at the Supafest in April 2012.

On August 18, 2011, it was announced Songz will be working on his fifth studio album titled Chapter V.[22] In an interview Trey said the album, which would act as the follow-up to Passion, Pain & Pleasure, was nearing completion. He also said, "It's my sixth year in the game so I've been here for a while now. You can expect the best me you've ever heard. I don't have any release dates in mind right now but I'm just making music and enjoying myself in the studio and having fun. I have a few dream collaborations on that album that I want, but they say if you blow out your candle and make a wish you can't tell people what you ask for or it won't come true".[23]

On June 20, 2013, in a radio interview with KS 107.5, Songz confirmed that he had already recorded about eight songs for his sixth studio album. On Christmas Day, Songz released the song titled "Na Na" on The Angel Network.[39] In February 2014, Songz released another track featuring Young Jeezy called "Ordinary"[40] and he was also featured on the remix to Mariah Carey's single, "You're Mine (Eternal)". In March 2014, Songz released the second single of his album called "SmartPhones".[41] On April 1, 2014, 50 Cent released a single featuring Songz, titled "Smoke", from his fifth studio album Animal Ambition. On July 1, 2014, Trey Songz released his sixth album Trigga and it debuted at number one on the US Billboard 200 with first-week sales of 105,000 copies.[42]

On May 18, 2015, Songz digitally released the full-length album Intermission I & II. Half of the tracks on the album were previously available on the Intermission EP, which was released on April 14, 2015.[43][44]Tremaine The Album was released on March 24, 2017, three years after his last LP. This album is based on his given name, Tremaine Aldon Neverson. The LP is made up of 15 songs and the lone feature comes from fellow Virginia artist and frequent collaborator MIKExANGEL on "Games We Play."[45]

On April 29, 2020, Trey Songz released "Back Home" featuring Summer Walker. The song was produced by Hitmaka and samples Rose Royce's "I'm Going Down".[46] On June 5, in response to the uprising following the murders of George Floyd and Breonna Taylor, Songz released "2020 Riots: How Many Times". He also released an accompanying video. On August 14, Songz released the second single "Circles", which was produced by his longtime collaborator Troy Taylor.[47] The official video was directed by Mahaneela and is said to have been inspired by Black love.[48] Songz' eighth album, Back Home, was released on October 9, 2020.[49]

Songz possesses a tenor vocal range.[54][55] His music is generally R&B, and occasionally displays his ability to blend with hip-hop while still maintaining a production of songs that evoke emotions and vary in subject matters that revolve around the appreciation of women, stimulation of club rave-ups, Fandy of lust and chronicling the highs and lows of love and relationships.[2] Songz's musical influences include Luther Vandross, Prince, R. Kelly, Michael Jackson and Usher.[56][57]

The Grammy nominated Chapter V most notably demonstrates his versatility, vocal range, lyricism and melodic girth as he expresses his eternal love for his woman through singles such as “Simply Amazing” with “Heart Attack” showcasing his vulnerable side that discusses trials and tribulations of love and heartache. “Ladies Go Wild” is a dance-friendly track that stems from his experiences of his international nightlife and travels. The “Hail Mary” track balances sensuality against grittiness and likens the pleasures of a woman to a ‘hail mary’ football throw, while “Without A Woman” exemplifies his appreciation for women over a classic 1970s R&B sound. Moreover, “Check Me Out” effortlessly combines Trey's rap flow and melodic skills, in extension to “Dive In” which is considered to be his most signature-sounding record that uses suave wordplay to compare his pending conquest of a woman's body to taking a dive in the pool. Songz describes his albums as work “that will take you many places, emotionally and sensually.”[2]

In December 2016, following a performance at Joe Louis Arena in Detroit, Songz was arrested and charged with felony assault of a police officer and misdemeanor aggravated assault for injuring a photographer.[58] It was alleged that the singer "began throwing objects after the venue cut his concert short due to an 11:30 pm curfew" and to have "struck an officer with his fist".[59] Trey Songz pleaded guilty in August 2017 to two reduced counts of disturbing the peace, and was sentenced to 18 months of probation, substance screening and anger-management classes.[58][60]

In June 2018, Songz was sued in federal court for the incident that took place following the 2016 Detroit concert.[61] A Detroit police officer alleges in the lawsuit that he suffered a "career-ending brain injury", and had to undergo a hip replacement when Songz allegedly punched him in the face.[62] The officer alleged that after being hit, he and Songz fell to the floor, with the singer landing on top of the officer, causing him to hit his head on the concrete and also hurt his hip.[62] A photographer working the show, also a party to the lawsuit, alleged that he sustained a head injury after Songz allegedly threw a microphone stand at him.[62][61]

On January 24, 2021, Songz was arrested in Kansas City, Missouri, while attending the conference championship game between the Kansas City Chiefs and Buffalo Bills. Songz was being heckled by fans, and he asked them to "chill out". An officer came over, and from sources and a video released by TMZ, an altercation ensued. This altercation lead to Songz arrest, and charges of trespassing, resisting arrest, both misdemeanors, and for assaulting a police officer, a low-grade felony. He was released from custody the next day. Sources connected to Songz with direct knowledge told TMZ he believes the officer in question had it in for him long before the altercation, and when the officer came over to him he was immediately aggressive. Another source says the officer's issue before the incident was that Trey and his crew were not wearing masks and refused to put them on.[63] Kansas City Police Department released the security video from their section, which showed that his Songz' party had several warnings after multiple encounters with security and police, eventually resulting in Songz being calmly escorted out of the seating area, at which point he threw the first punch at the police officer. [64]