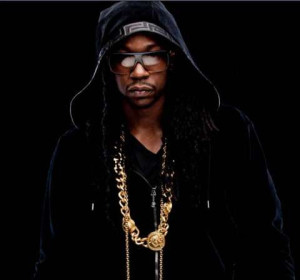 In February 2012, Epps signed a solo record deal with Def Jam Recordings, an imprint of Universal Music Group. The following August, he released his debut studio album Based on a T.R.U. Story on August 14, 2012, to mixed reviews.[4] The album spawned three successful singles: "No Lie," "Birthday Song," and "I'm Different", all of which charted in the top 50 of the Billboard Hot 100 and were certified Gold or higher by the RIAA, along with the album being certified Gold. His second studio album B.O.A.T.S. II: Me Time was released on September 11, 2013; supported by the lead singles "Feds Watching" and "Used 2". Epps began working with TV network Viceland on a show called Most Expensivest, which debuted on November 15, 2017, and has aired three seasons.

2 Chainz was born Tauheed Epps in College Park, Georgia.[5] He attended North Clayton High School, where he played basketball and graduated second in his class.[6] While in high school, he dealt marijuana and was arrested for felony cocaine possession when he was 15 years old.[6]

He later attended Alabama State University on a scholarship, and played on its basketball team from 1995 to 1997.[7]

When asked by Rolling Stone about longstanding rumors that he had graduated from Alabama State with a 4.0 GPA, which had been widely reported on many sources including Wikipedia, 2 Chainz said: "Don't believe anything on Wack-ipedia. There's a lot of false stuff on there, to the point that every time I try to fix one thing, something else comes out."[8] In fact, he transferred to Virginia State University due to circumstances he was reluctant to speak about. "I got into some trouble, went somewhere else, and came back. But I graduated, and that's that. That was then," he said.[6]

Epps formed the hip hop duo Playaz Circle (the word "Playaz" being a bacronym for "Preparing Legal Assets for Years from A to Z")[10] in College Park, Georgia in 1997, with his high school friend Earl Conyers (known as Dolla Boy), while Epps adopted "Tity Boi" as his moniker.[11] Following the release of an independent album titled United We Stand, United We Fall (2002),[10] the duo were introduced to fellow Atlanta rapper Ludacris, when he moved into their College Park apartment complex, whilst he was acting as a DJ.[11] After taking interest in Playaz Circle, Ludacris began to record several songs with the group, playing some of them on his radio station.[10]

Ludacris soon became one of the highest-selling rappers in the Southern United States.[11] After hearing of their situation, Ludacris requested of Epps that the duo join his newly formed record label Disturbing Tha Peace, a subsidiary of Def Jam Recordings. Epps agreed to sign, although Conyers did not officially join the label until his mother regained her health, a year after the initial signing.[11]

Their debut album Supply & Demand, was released on October 30, 2007. The lead single and their debut single, "Duffle Bag Boy", became an urban hit single. The song features Lil Wayne, and was performed by the duo at the BET Hip Hop Awards. The duo released their second studio album Flight 360: The Takeoff, on September 29, 2009. In January 2010, Playaz Circle filmed a music video for their single "Big Dawg" featuring Lil Wayne and Birdman at Studio Space Atlanta. Shortly afterwards, Epps left Disturbing tha Peace, a move he claimed was taken in order to advance his career. Although Ludacris was initially reluctant to allow Epps to leave the label (as he felt Epps could still prove financially successful), he eventually accepted the decision.[12]

Throughout Epps's career, critics and fans alike have speculated the pseudonym "Tity Boi" was meant to be derogatory towards women, although he repeatedly denied such accusations.[13] In early 2011, Epps decided to change his stage name to 2 Chainz, as he perceived it to be more "family friendly."[14] Following the name change, Epps released a mixtape entitled T.R.U. REALigion, which became his first mixtape to appear on the music charts, peaking at number 58 on the US Billboard Top R&B/Hip-Hop Albums chart.[15] Since the success of the mixtape, Epps has made numerous guest appearances on tracks by prominent recording artists such as[13] Kanye West ("Mercy") and Nicki Minaj ("Beez in the Trap").

On March 24, 2012, Epps announced his debut studio album, whose title he had changed to Based on a T.R.U. Story from its original title of T.R.U. to My REALigion,[12] was set for an August 14, 2012, release date.[16] The album's lead single, "No Lie," features Canadian rapper Drake, and was released on May 8, 2012.[17] On May 11, it was under speculation that Epps had signed to Kanye West's GOOD Music label, after West tweeted: "2 Chainz is charging 100k for a verse now cause he's G.O.O.D!!!!!"[18] However, Epps later denied those rumors, saying: "He just said I'm good, like I'm ill. But we was talking and I think I was jeopardizing my brand sometimes by doing the homeboy special. So I think he felt like we should just put that out there that we ain't doing no more of that."[19] On May 30, 2012, Ciara revealed 2 Chainz was featured on "Sweat," the intended first single from her fifth studio album, One Woman Army.[20]

Based on a T.R.U. Story debuted at number one on the US Billboard 200, selling 147,000 copies in its first week.[21] The album was met with mixed reviews, earning a score of 55 on metacritic.[22] As of September 23, 2012, the album has sold 288,000 copies in the United States.[23] In September, Epps performed at the 2012 MTV Video Music Awards, alongside longtime friend Lil Wayne. After the release of his debut, Based on a T.R.U. Story, Epps made momentous strides. He facilitated his first solo worldwide tour, selling out most of its dates; he was nominated for over 13 BET Hip Hop Awards,[24] bringing home 4 such trophies;[25] he earned The Source Magazine's "Man of the Year" award;[26] he released a collaborative endeavor with ADIDAS,[27] and later Beats By Dre;[28] and he was nominated for three Grammy Awards, including Best Rap Album.[29]

B.O.A.T.S. II: Me Time featured guest appearances from Pharrell Williams, Fergie, Drake, Lil Wayne, Pusha T, Mase, Chrisette Michele, Iamsu!, T-Pain, Dolla Boy, Rich Homie Quan, and Lloyd among others. The album's production was handled by Diplo, Mike WiLL Made It, Drumma Boy, J.U.S.T.I.C.E. League, Mannie Fresh, Wonder Arillo, Da Honorable C-Note and DJ Toomp among others.[39] It was also supported by the single "Used 2," along with the promotional singles "Where U Been?" and "Netflix." Upon the album's release, it was met with generally positive reviews from music critics.[40] It also faired decently commercially, debuting at number three on the US Billboard 200, and number two on the Top R&B/Hip-Hop Albums chart selling 63,000 copies in its first week.[41]

On October 23, 2013, Epps revealed that he had begun working on his third studio album immediately following the release of B.O.A.T.S. II. He also stated he had the first single from his third album ready for release and that he still wanted to get Jay-Z featured on the album.[42] In November 2015, 2 Chainz revealed that he was releasing a joint album with Lil Wayne, titled ColleGrove.[43] On May 5, 2014, Epps released a brand new EP titled FreeBase for free digital download. It includes 7 songs, and includes features from Lil Boosie, A$AP Rocky, Rick Ross and more. The EP has earned over 200,000 downloads.[44] In January 2014 Epps released a promotional single titled "I'm A Dog."

Main articles: Pretty Girls Like Trap Music and Rap or Go to the League

On January 27, 2016 Epps released an EP titled "Felt Like Cappin" the EP was released via online streaming sites and iTunes, the EP is promoted by the single "Back On That Bullshit" featuring Lil Wayne.[45]

Epps began 2016 with the March release of a 12 record collaborative album with rapper Lil Wayne titled ColleGrove. The album was supposed to be the debut LP between 2 Chainz and Lil Wayne, however, Wayne's ongoing lawsuit with Cash Money Records prevented Wayne from being a primary artist on the album. Epps appears as the primary artist on the album with eight tracks featuring Lil Wayne. The album features prominent producers such as: Honorable C.N.O.T.E., Mike Will Made It, Zaytoven, TM88, Metro Boomin, London on da Track, and more. ColleGrove received decent reviews from critics and fans.

In 2017 Epps released his fourth studio album titled Pretty Girls Like Trap Music on June 16 by Def Jam Recordings. The album features Travis Scott, Nicki Minaj, Swae Lee, Migos, Jhene Aiko, Pharrell Williams, and more. Album production was done by Mike Will Made It, Buddah Bless, Mike Dean, Murda Beatz, and more. The album was supported by three official singles: "Good Drank", "It's a Vibe" and "4 AM". The album was also supported by a nationwide concert tour, as well as several pop-up shops in the US.[1] [2] 2 Chainz alluded to the album showing "growth and maturation." He stated the content would maintain its edginess while also elevating trap music to a point where everyone can appreciate it. Pretty Girls Like Trap Music received widespread critical acclaim, with most critics citing the album as his best album yet.

On November 15, 2017, the first episode of Most Expensivest aired on the TV network Viceland. The show focuses on 2 Chainz visiting different locations offering the "most expensivest" goods and services. Each show covers a particular theme, with shows ranging from personal health to extravagant indulgences. The show offers a unique insight into products and services that have been created with the explicit intent on being exclusive and expensive. 2 Chainz offers a unique, and often humorous insight into the products, especially the ones he personally finds to be either amazing or ridiculous. The show was renewed for a 20-episode third season, which aired in early 2019.[46]

The Play Don't Care Who Makes It is the fourth EP released by Epps on February 8, 2018, by Def Jam Recordings. The EP consists of four songs one of which features appearances from YG and Offset on the song "PROUD". Production was done by Minus, June James, Nonstop, Streetrunner, and more.

In October 2016, he opened a line of hoodies called CEO Millionaires or Create Every Opportunity Millionaires.[52] He also has his own line of sweaters called "Dabbing Sweaters."[53]

On May 10, 2019, the Atlanta Hawks announced that 2 Chainz had acquired a minority ownership stake in the team's NBA G League affiliate, the College Park Skyhawks.[54]

On January 6, 2015, 2 Chainz announced that he was starting his own independent record label "The Real University" (also known as "T.R.U."; or "The Real U").[55][56] The announcement also revealed that frequent collaborators Cap.1 & Skooly were signed. Additionally, they signed former Young Money[57][58] artist Short Dawg, who is now known as Fresh. Along with the announcement of the label's founding, they also revealed they'd be releasing their debut mixtape TRU Jack City on January 27, 2015. On October 4, 2019, 2 Chainz announced that T.R.U has signed a partnership deal with Atlantic Records.[59]