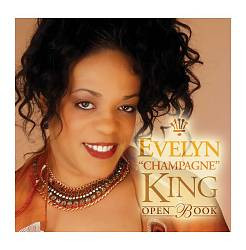 Evelyn King was born on July 1, 1960, in New York, New York, and raised in Philadelphia, Pennsylvania. She is one of eight children. Her uncle Avon Long had played the part of Sportin' Life in the first Broadway revival of Porgy and Bess and worked with Lena Horne at the Cotton Club. Her father sang back-up for groups at Harlem's Apollo Theater. Her mother managed a group called Quality Red.

King was discovered as a young woman while working with her mother at Philadelphia International Records as an office cleaner. Producer Theodore T. Life overheard her singing in a washroom and began coaching her. She was eventually signed to a production deal with Life's Galaxy Productions and a recording contract with RCA Records.[5]

King released her debut album, Smooth Talk, in 1977. It included the song "Shame", which is her only top ten on the Billboard Hot 100, peaking at #9; the song also reached #7 Soul and #8 on the dance chart. The record was eventually certified gold. Another single from that album, "I Don't Know If It's Right", peaked at #23 on the Billboard Hot 100 and #7 Soul; it would become her second certified gold single. In 1981, the single "I'm in Love" was released from the same-titled album; it reached #1 on the R&B singles chart and dance chart in August of that year; it also peaked at #40 on the pop chart.

In 1982, King released the album, Get Loose. It yielded a top twenty pop and #1 Soul hit with the single, "Love Come Down". The song also peaked at #1 on the dance chart and reached the UK Singles Chart top ten, peaking at #7 for three weeks. The follow-up, "Betcha She Don't Love You", peaked at #2 on the Soul chart and #49 on the pop chart. From the mid- to late-1980s, King would continue to chart on the Soul chart, placing eight singles in the Soul top twenty, with three making it to the top ten.

On September 20, 2004, King's "Shame" became one of the first records to be inducted into the Dance Music Hall of Fame at a ceremony held in New York's Spirit club.[citation needed]

On August 14, 2007, King released her first studio album in 12 years, Open Book. It featured the single "The Dance", which peaked at #12 on the Hot Dance Club Play Chart. In 2011, King also collaborated with deep house producer Miguel Migs, on the track "Everybody", which was included on his album Outside the Skyline. The single for "Everybody" was released on July 19, 2011.

In 2015, King formed a group with disco vocalists Martha Wash and Linda Clifford called First Ladies of Disco. The group released their debut single "Show Some Love" in March 2015,[7] which peaked at number six on the Dance charts.[8] The group embarked on their first tour together in 2017. In December 2017, King left the group.